Actually the most important step in the finishing process, is to come up with the entire finishing ‘schedule’ (or recipe) that one is going to use to finish the piece. This schedule should be performed on scrap pieces from the project (ideally), or at the very least on scrap pieces from the same species. For instance the water based dye we use a LaPlaca Woodworks to accent the color of the South American Mahogany used on the Boston Blockfront chest, contains no binders, so after the dye drys the wood takes on a completely different appearance, that usually is just terrible looking. Each successive step in the process changes what the final color will look like, so unless the complete finishing schedule has been pretested, the final outcome will be a surprise (maybe a good or bad surprise) at $15+ a board foot for Mahogany we would like to keep surprises to a minimum.

First we use a very diluted water based dye to accentuate the color of the South American Mahogany, as I previously mentioned the dye contains no binders. This means the dye can be moved and to an extent removed with simple water, to ‘lock’ the dye we brush on a couple of coats of 1.5lb cut blond shellac.

After the shellac has dried, the chest gets abraded with gray Scotch Bright Pad and then gets an oil based glaze based on a gel stain. The shellac serves two purposes here, one to bind the dye into the wood, secondly to keep the glaze coat from ‘grabbing’ the wood too aggressively, so the glaze can be moved about. The glaze accentuates the the dye and adds a dimension to the coloring that either product alone cannot achieve.

After the glaze has dried properly (in a couple of days), we then apply a couple of coats of shellac, in the case of this chest the shellac used is a garnet shellac at a 1.5lb cut. The garnet shellac helps to slightly color the wood (garnet shellac is reddish brown in color) additionally and adds chatoyance to the finish.

Finally we add a couple of very ‘tightly’ applied coats of Waterlox Original Finish to the chest, Waterlox is a very durable phenolic varnish that has a very nice semi-gloss glow after 3-4 weeks of curing..

The finished project is located here..

After the building of the project has completed, the next st 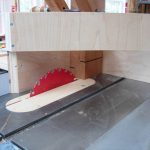 Now we need to start the process for the drawer fronts, the 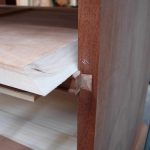 Next we need to miter the ends of the drawer blades (aka. d 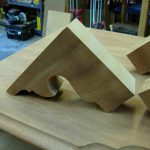 Next we are machining the bracket feet for the chest, the b 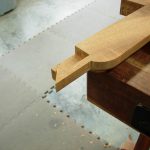 The front base moulding on the Boston Blockfront chest need 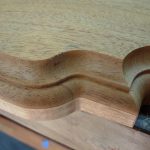