Now onto the most iconic feature of the Goddard-Townsend Newport furniture, the shell carving. The top drawer of the either the three or four drawer chests receives one concave carved in place shell and two convex applied shell carvings. The center rosette of the shell carvings have many different variants, they various styles of the pedals within the rosette seem to correlate to the date the chest was made, this particular chest which was from 1765 featured double pedals in the rosettes.

A couple of notes about the shell carvings in general; the carving is not for the faint of heart, the grain is always changing direction. The center rosette is some of the most intense carving I have every experienced, the close proximity of the pedals an small overall size of the rosette make this a real challenge.

First the pattern is traced onto the top drawer, we use transfer paper to accomplish this task. 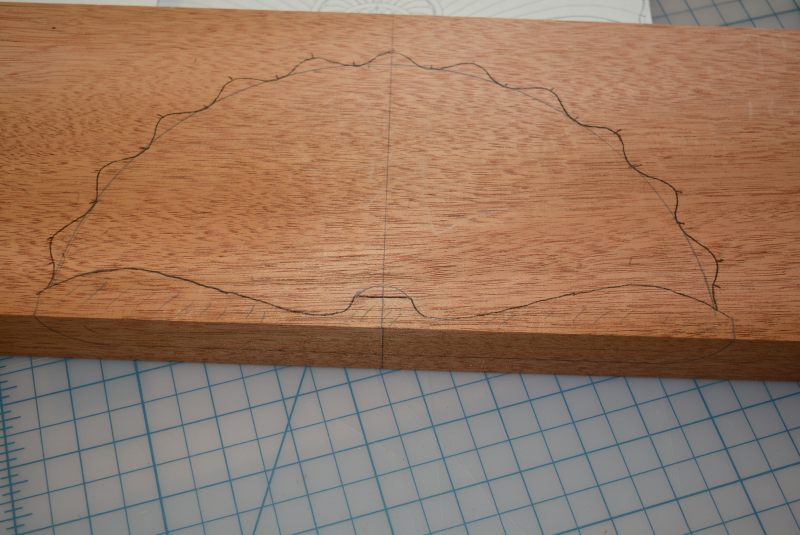 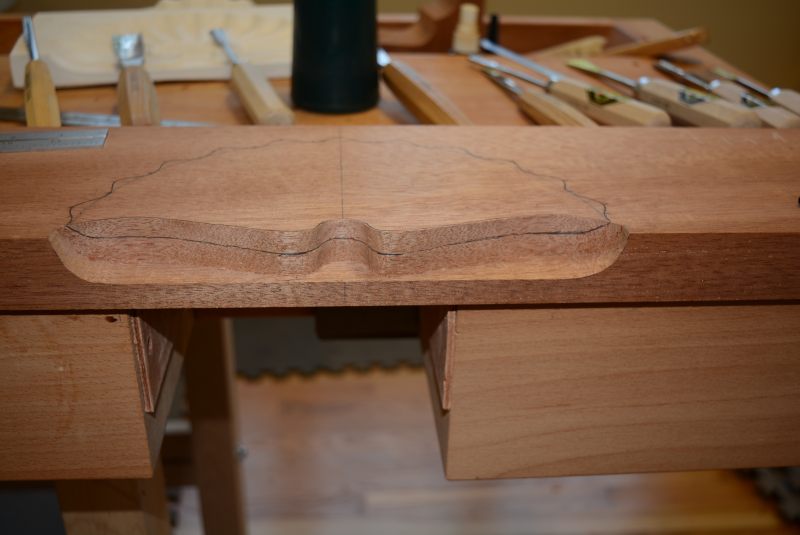 Black lines show area that must be excavated.. 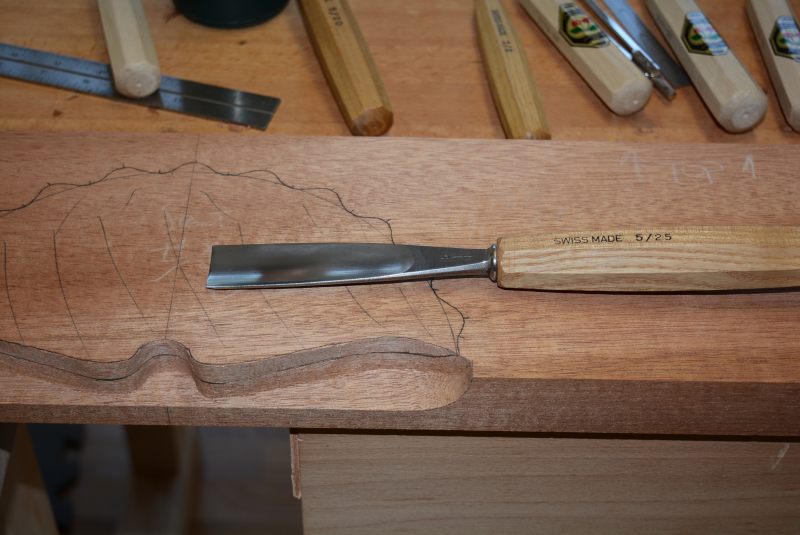 Lots of material must be removed, the very edge of the concave area is shaped with a #5-25 Swiss gouge 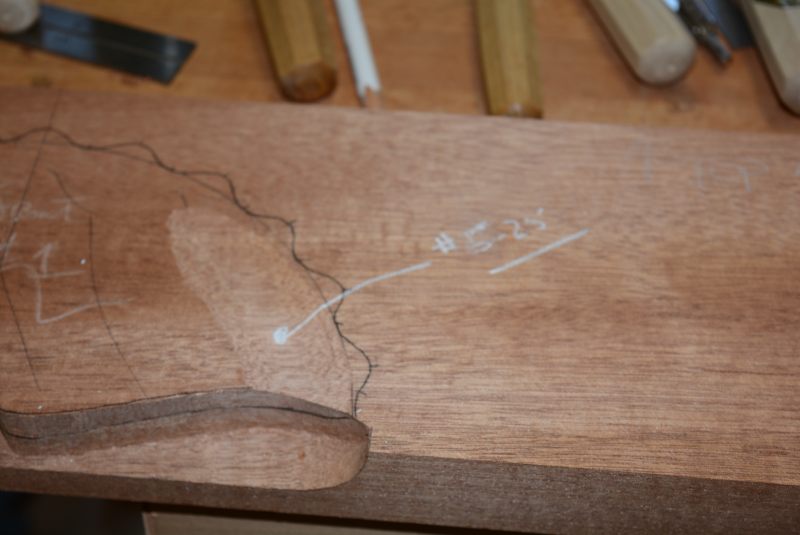 The remainder is removed with a #7 or #8 gouge, then finally smoothed with a #3 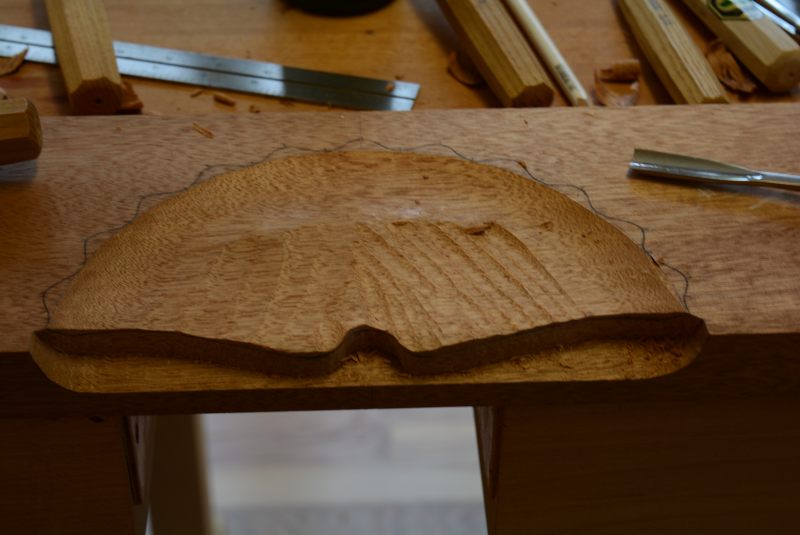 The rosette and rays are transferred to the stock, the area around the outside of the rosette is lowered down 1/16". 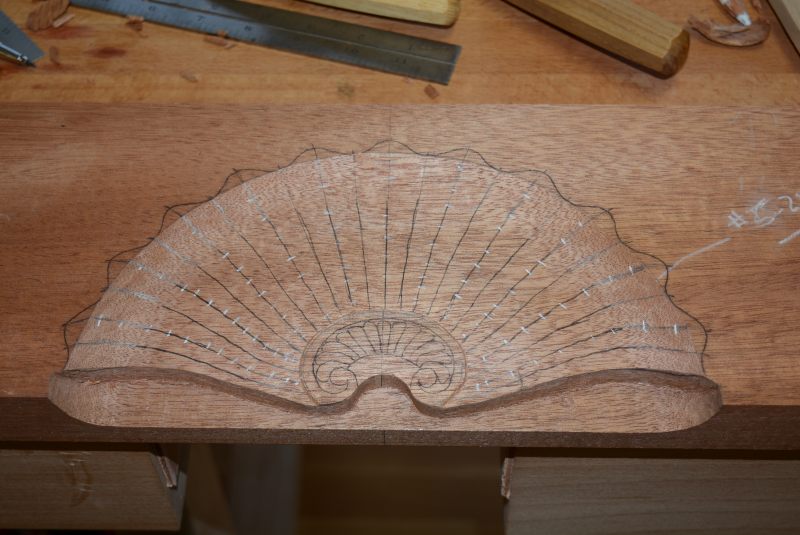 The rays that are marked in black and white, will be concave rays. the area we be further excavated with #8 sweep gouges, right up to the line of the termination of the ray. After all the concave rays are carved, the next process will be to move onto the convex rays, these are carved (not shown) using #1 gouges. The trick is to get nice flow from concave to convex (sinusoidal). 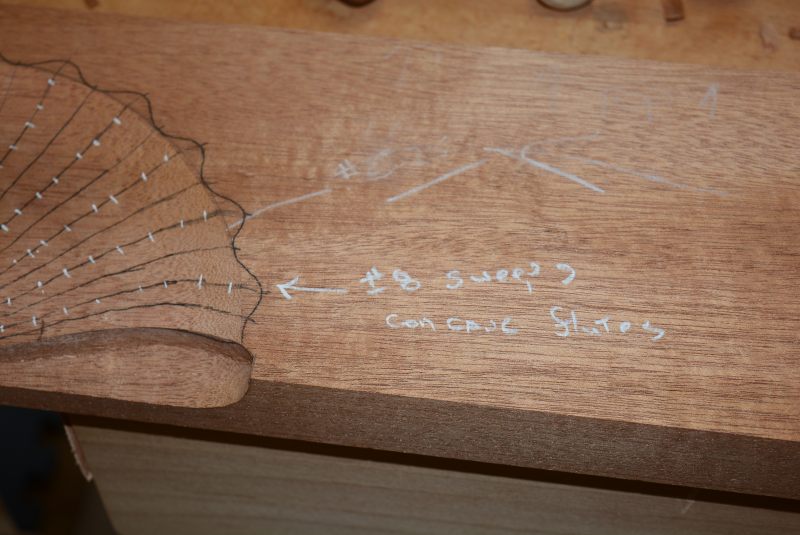 The concave carving on this particular John Townsend chest featured a concave shell that had a 'flat' at the base of each convex ray, its kind of hard to tell this is a concave shell (but it is), We see the area between the rosettes volutes being removed.. This chest also featured a semi-circular area between the rosettes which is kind of unusual. Used a tiny vee tool (3mm) to relieve the area above and between the petals, then the petals and area around the petals were 'chipped' carved using a #3 fishtail gouge. 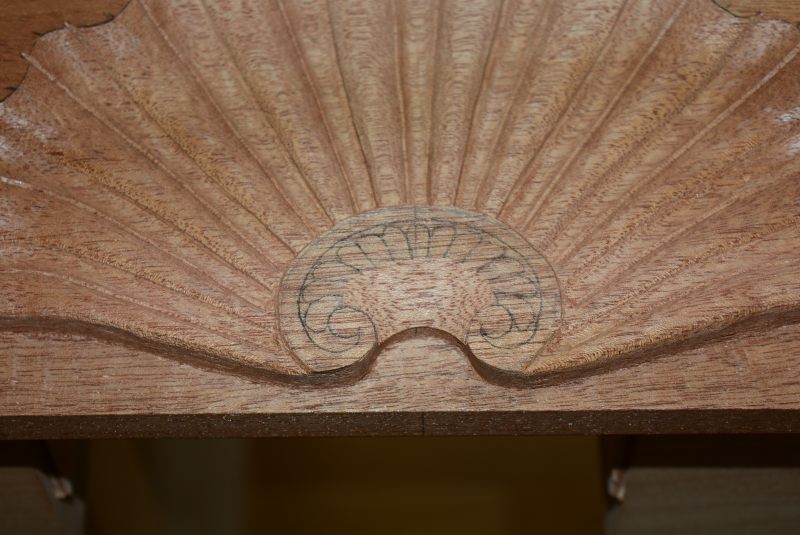 Now onto the convex shells. A previously mentioned, the good news is the convex shells are applied to the top drawer front, so a major or minor catastrophe during carving does not mean throwing away the top drawer as with the concave shell carving. First the rough shell is screwed to a plywood backer board, by securing the carving with screws, it allows us to remove the carving to perform some 'touch-ups" and adjustments..

Center line on convex shell is draw in, the shape for the block front is drawn in on the bottom of the shell using the drawer pattern as a template.  As shown here, some of the bulk material from the front edge was removed using a large 20mm #1 carving gouge. 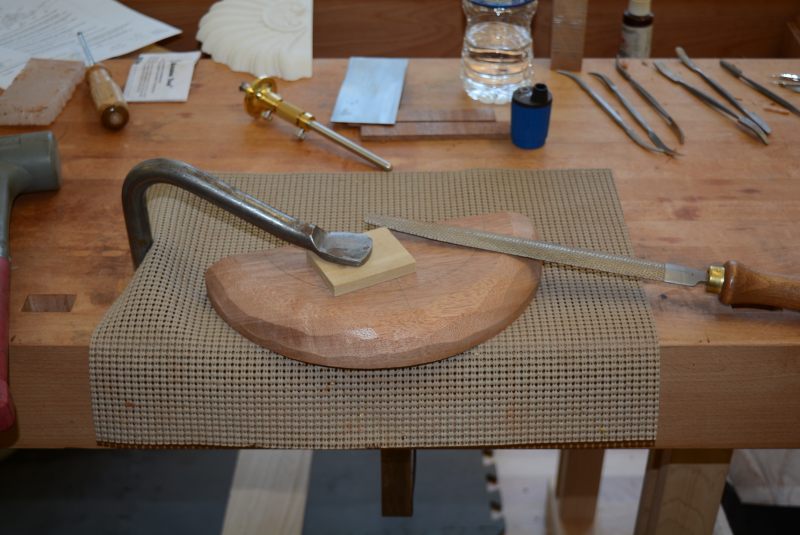 The shape for the rays, the center medallion are drawn on the front of the shell, here we see the area beneath the lower ray has been lowered, the lowered area matches the block front contour. 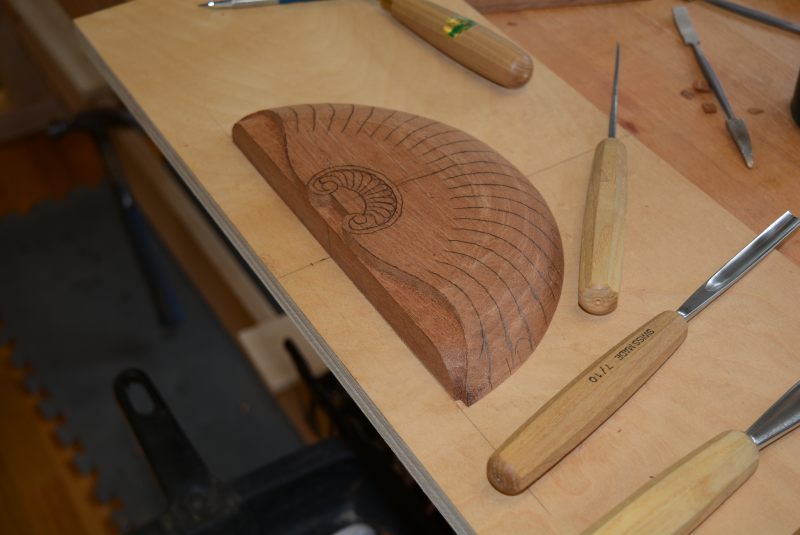 Here we see the area surrounding the center medallion has been lowered down 1/16". Next (not shown) the marking for the rays are drawn in up to the center medallion, after the all rays have been redrawn a vee tool is used to define the rays, the convex rays are carved first using a #1 chisel to complete the task. The concave rays are carved with various sizes of #8 sweep gouges. 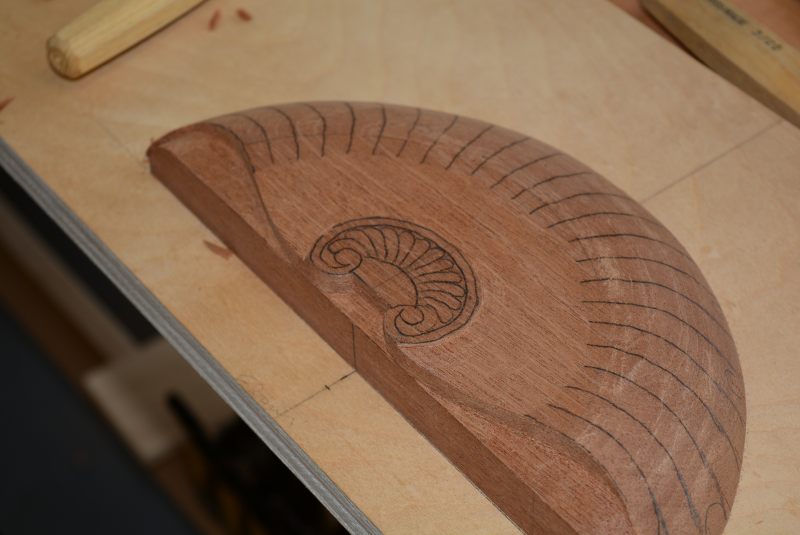